On 1 September 1943 Ozark Air Lines was founded to fly services from Springfield, Missouri,[2] and in January 1945 it began flights between Springfield and St. Louis on Beech 17 Staggerwings, replaced by Cessna AT-17 Bobcat in the late 1940s. The required license from the Civil Aeronautics Board was not forthcoming and operations had to stop.

In July 1950 Ozark was granted a certificate to operate Parks Air Transport routes not previously activated. Services were started on 26 September 1950 using Douglas DC-3s from St. Louis to Chicago, Tulsa and Memphis.[2] In 1955 the airline had 13 DC-3s flying to 35 cities between Sioux City, Indianapolis, Wichita and Nashville. Ozark's main hub was Lambert–St. Louis International Airport. Like other Local Service airlines it was subsidized; in 1962 its operating "revenues" of $14.0 million included $4.5 million of federal subsidy.[3]

In 1961 Ozark's network reached from Minneapolis to Nashville and from Kansas City to Indianapolis and Louisville. Denver was added in 1966 and in 1969 the network sprouted eastward: Ozark was awarded nonstops from Champaign and Peoria to Washington Dulles, continuing to New York LaGuardia. Atlanta was added in 1978 and four Florida cities in winter 1978-79. 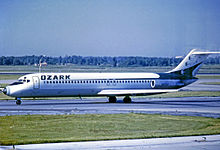 In the mid-1980s Ozark and TWA had a de facto duopoly at Lambert–St. Louis International Airport, a hub for both. Ozark accounted for 26.3 percent of boardings at STL in 1985, while TWA accounted for 56.6 percent.[5] On March 1, 1986 the two airlines announced plans to merge: TWA would buy Ozark for $242 million in cash.[6] Shareholders of both airlines approved the merger by late summer, and the U.S. Department of Transportation gave its approval on September 12, 1986.[7]

Ozark ceased to exist as an independent company on October 27, 1986. The Ozark DC-9s were gradually painted with a modified paint scheme with "TWA" in the tail. Over the next couple of years the fifty Ozark airplanes were repainted in the TWA livery.